Showing posts from October, 2012
Show all

October 28, 2012
I'll be spending most of November frantically split between rewriting Walkabout (from an incoherent bunch of word documents, scraps of paper into a format ready to be playtested), creating sculptures, etching metal for the purposes of fine art prints, painting WW2 style bomber art on sheets of metal, and tasting more varieties of alcoholic beverage than most people get through in a lifetime (while getting paid to do so). If I survive November, the aim is to get a pre-production copy of Hell on Eight Wheels printed, get a bit more refinement and playtesting happening on Walkabout, and then to start work on the first "Pocketmod Playbooks" game. General feedback from G+ indicates that I should produce this first game based around the concept of scavengers in the fallen cities of the Walkabout world. (several people commented and virtually all of their comments pointed the same way). I think a follow up game might explore the Goblins from last year's tarot deck.
Post a Comment
Read more

October 27, 2012
Warning: This could get controversial, I'm basically in "Rant Mode". I thought about the "Conan" news this week, Arnold Swarzenegger reprising the role. Ignoring the sequel "Conan the Destroyer", ignoring the Jason Momoa remake. I liked the newest movie version of Conan, I've encountered people in extended circles of social-media friends who worked on it, both script-wise and effect-wise. I heard that these fans behind the scenes had planned to stick as close to the source material as possible, but had some "suggestions" from studios and producers. They didn't quite get the movie they wanted, but it was probably closer to what they expected. This reminded me of the "John Carter" debacle earlier in the year. When I heard that the movie was finally in production, after decades of circling the drain in development hell, I was interested. I was one of the peoplewho went to see the movie in 3D in a virtually empty theatre. I
1 comment
Read more

October 25, 2012
This year NaGaDeMon seems to be getting a decent crowd of participants. I've already put my hand up with the intention of getting a finalised second edition of Walkabout into people's hands (the first edition was created for Game Chef 2010). I'm hearing a few good things about some of the other games that people are intending to produce. For everyone who is participating, good luck. For those who aren't, go and have a look at the Google plus page or the Facebook group. They seem to be the two places where the action is focused.
Post a Comment
Read more

Animation of the Walkabout Globe

October 24, 2012
Just thought I'd share the spinning globe for the walkabout world. Hopefully it will be a part of an upcoming promotional video for the project
Post a Comment
Read more 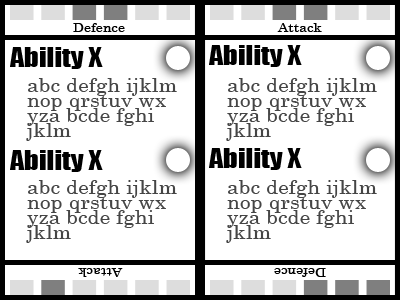 In the pocketmod, there is a front page, a back page and three double page spreads in the middle of the booklet. This offers some great opportunities for formatting...stuff that you just don't get when you're stuck with a single page. Here's an idea I had for formatting the centre double page spreads... It's based off an idea I've been toying with for a while...a way to speed up combat while giving it a strategic edge. The first double page spread would probably have some flavour text about the character type, the middle and last double page spreads would provide a range of abilities (some of which might be granted automatically, others bought with XP). The fun bit is the formatting in the top and bottom margins. Whether you hold the page right way up, or upside down, there is a defence matrix on the left and an attack matrix on the right. With three double page spreads, you get six different combat strategies you could use. For example...
2 comments
Read more

There seems to be a growing community of game designers working on the Pocketmod platform. A single sheet, folded and cut in such a way that it produces a tiny eight page booklet that can fit in a pocket or a wallet. It's similar to the ideas that have been floating around the roleplaying community for at least two decades now...an entire game on a single sheet of paper. I've been thinking about the concept, and taking my own spin on it. How about a game in three parts. Part 1: Core rules that everyone uses. These are the basics of the game divided into eight small pages. Part 2: Character booklets. Everyone gets their own character booklet based on their character's specific type or class. The front page is a title, the back page is statistics, and the middle is an explanation of powers and abilities specific to this character. Part 3: Scenario booklets. For each game, a random scenario booklet is chosen (or maybe a progression of scenario booklets for an
2 comments
Read more

A further bit about labels, relationships and stereotyping

October 21, 2012
I’ve thought a bit more deeply about my last post. All of the examples I’ve given have related to a single axis. The “Redneck” example was a single linear axis, so was the WW2 “Jewish” example; a single axis of relationship gives the idea of one-dimensional characters. The relationship system is far more than this. A simple expansion of the examples shows how the relationship system could be much more complex and richer for the purposes of character exploration. I’ll pick a new example for this…something that fits better with the themes of Walkabout. A scattering of neighbouring local communities have developed their own opinions about the dangers in the world and the best ways to deal with them. Some individuals are fanatical about their opinions; others are more reasonable and willing to listen to helpful suggestions from their fellow survivors. Generally, three belief systems have emerged. Science – The only way to understand the spirits is by understand
Post a Comment
Read more

October 10, 2012
Interspersed through the rest of the year, I’m going to look at a couple of core rulebooks to see how they are laid out. With pros, cons and some critique about the game based purely on the layout, and the things presented in the rules. I'm doing this because I'm interested in the way different games present their systems and settings, in the hope that I'll be able to learn something from them and get things right with the games released by Vulpinoid Studios.  RIFTS (typical of most Palladium stuff) 256 pages Page 1 – Disclaimer about the supernatural Pages 2 to 6 – Credits, Contents and Quick Find Table Pages 7 and a bit at the top of 8 – A bit of a designer note and a glossary of terms. The Rest of 8 to 10 – Start of character generation Page 11 – Optional Damage rules (WTF? Why here?) Pages 12 through to most of 15 – The next bit of character generation The last bit of 15 to 17 – The experience system Page 18 – Optional rules for rounding out your
Post a Comment
Read more

October 09, 2012
80 pages – Novella of a Journey I’m envisioning this third part of the boxed set to be a travelling novella. The whole thing will be framed by the journey of a single person across the beautifully desolate landscape…it will be illustrated in colour (using a combination of techniques), and I’m thinking that it should weave the tale of a woman journeying in this exotically familiar world. I’m aiming toward something akin to a post-apocalyptic version of “The Canterbury Tales” or “1001 Nights”. The Heroine will meet people on her journey, and these chance encounters will tell her their stories. The stories are designed to bring a personal perspective to the savagery and esoteric mystery, providing ideas for players and GMs to insert into their stories. Each of these stories would be about ten pages long (probably four or five of these), interspersed with the framing narrative of a character completing her journey along one side of the Australian coast. The most dramatic jour
Post a Comment
Read more

October 07, 2012
Since Walkabout will be divided into a series of books, some with rules and some without, I'll be writing up the non-rule books in the form of a travel guide to the new world. This is a tentative outline for the second book, I can certainly see that some parts of the book could easily blow out to twice their size (or more), but the aim is to keep the book fairly concise. This book is meant to be the kind of thing that a novice adventurer might actually carry around with them while they are coming to grips with the strange world outside of the city where they grew up.   112 pages – World Almanac/Atlas/Survival Guide Important Things to Know (16 pages) Introduction (2 pages) History (4 pages) Global Geography (4 pages) Australian Geography (4 pages) General Customs (2 pages) Customs and Rituals of the New World (32 pages) The Northern Alliance (4 pages) Capricornia (4 pages) Thylacine Kingdom (4 pages) Independent Territories (4 pages) The Nomads
1 comment
Read more
More posts