Showing posts from December, 2016
Show all

Behind the Scenes with Angels 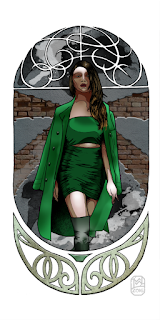 As you can see from the last post, I've been working on some illustrations of angels over the past couple of days. This rush of creative energy has basically been prompted by my Dad recommending me to look at the artwork of people he considers my peers (i.e. other children of people he knows from his church)... then me looking at that artwork and thinking its absolutely rubbish... then me wondering how these artists with poor technique and unprofessional output ended up getting jobs in the worlds of animation, graphic design, advertising, comics, and assorted other creative fields.  I figured that there is no point simply complaining about it, and maybe I should just go back to producing more work of my own to hone my craft. The tower maps were a part of that, the factional illustration to go with the tower maps were similarly a part of it. These angel illustrations are simply a way of refining another of my artistic styles. Perhaps to go with one of my own game desi
Post a Comment
Read more 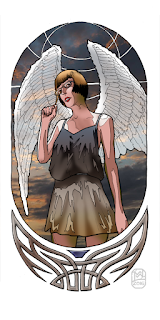 It's been too hot to do much else, so I sat down last night and started this illustration, it might end up a part of the "familiar" project, maybe an element of the other urban fantasy projects I've been considering over the past year or two...but most likely it will link into the urban angel stuff I've also been thinking about.  I'm also considering that this image might end up being the front cover for something... let's see where it ends up. Special thanks have to go to Roxy , for agreeing to be my muse on this image.
Post a Comment
Read more 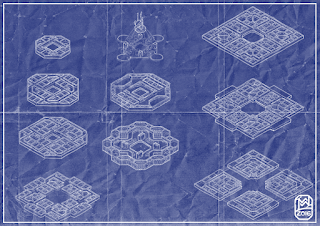 The last post depicted the people of the tower...this one depicts some blueprints of the tower. First, the general layout of the tower Then a few specific parts of the tower. Including the first few which are accommodations and locations where denizens of the tower live, sleep or store their stuff.  These next ones are places where work is done, and general utilities scattered through the tower. A few images of detailed elements that don't really fit the two categories above, things like pools and meeting halls where people gather for assorted reasons. Then some blanks for people to make their own. I've still got a whole heap of half-completed sketches in my notepad, these should be completed and added to the collection soon.
Post a Comment
Read more

People of the Tower 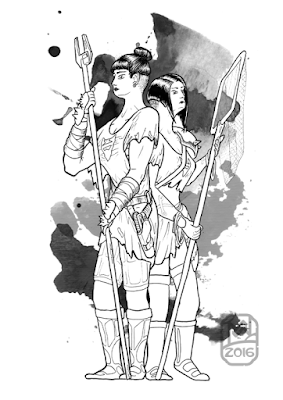 Once again it's been over a week between posts. It's just that time of the year when family are more important, not that they aren't important at other times of the year...but this is the time when trips to visit them for festivities and ritual gift giving occur. Over the past few weeks I've been developing an arcology tower setting (probably generic, but I might create a simple game system to go with it). Here's a few of the different types of people who might be likely encounters while exploring the tower. The illustrations aren't complete, I'll probably be shading them a bit more, perhaps adding textures to their clothes... and there will be far more illustrations like these to develop the wider community within the tower. It's just a case of working out who might be interesting to meet, and what types of people might be useful to flesh out the population.
Post a Comment
Read more

December 19, 2016
I found that I had set up a tumblr a few years ago, I haven't really done anything with it. http://vulpinoid-blog.tumblr.com/ I revisited it tonight because I was looking for social media platforms that were a bit more video and image friendly... Especially after drawing up some images today and generating time-lapse footage of my work in progress. If anyone has some good tumblrs that they'd like to recommend me, I'd love to see what people think is worth following.
Post a Comment
Read more 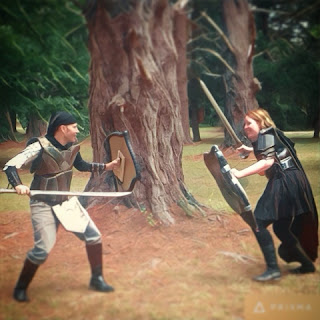 The reason for building the scale armoured sleeve was today's LARP. It seemed odd to run a LARP in the lead-up to Christmas, a time when families are gathering for BBQs, workplaces are holding their end of year Christmas parties (and closing down for the holiday period), but the majority of players assured me that they'd be in attendance, and a few even told me they'd be bringing new players along. So, with a dozen regular players, a few irregulars promising they'd show up, and a number claiming that they'd be bringing some new faces, I had no idea how many people would actually be in attendance. It could have been as many as 20, it could have been as few as 10 (based on promises)... I had to be prepared for the most, because if there's one thing I can't stand, it's leaving players bored. I've been to too many LARPs where the story is based on the activities of a select group of players while everyone else just lingers on the edge of the sto
Post a Comment
Read more 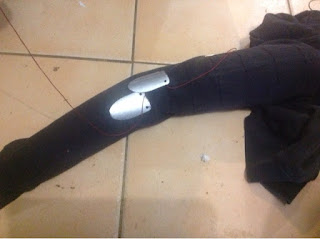 With the scales cut and painted, and the sleeves of the hoodie marked out, it's now time to sew the scales on, and make the final piece... ...or so I thought. I had hoped I could attach the sclaes to the sleeve with a pair of holes at the top of each scale, and if I had used a more sturdy material for them this might have worked. But as it is, the scales are too flimsy, and bend too easily with only a pair of holes. I also found that the spacing lines marked on the sleeve were probably a bit too far apart, so that means making some further adjustments to the pattern before sewing can properly commence. Each scale is roughly 65mm long, and 35mm wide, and I had made the spacing lines roughly 50mm apart, this was to ensure some overlap...but there just wasn't enough overlap for my liking once the scales actually started being put solidly into place. So for every 2 spacing lines, I've ended up sewing three rows of scales (basically creating rows of scales that
Post a Comment
Read more 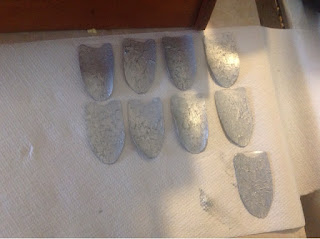 At the end of part 1, we were cutting up 150-odd scales out of a dozen soft drink bottles. Not sure whether this would be enough (but seriously suspecting it wouldn't be). The next stage is to get these scales to stop looking like cut out pieces of plastics, and instead make them look like polished pieces of metal, or insect chitin, or some other material from which our armour is made (in the context of the game) at the moment, this project is proof of concept, so I'm taking a deliberately simple course of action. I've considered that later repetitions of this armour might see every scale painted with a dark green vein, then lighter green to represent a series of leaves, but for the moment, a simple silver will suffice. Painting Step The silver needs to be protected from the hits of the swords, so I'm going to use one of the properties of the material to it's advantage...that being its transparency. I'm going to paint the underside of the scales. Thus givi
Post a Comment
Read more

Here's a little project I've been working on over the last day or two. I've got some LARP armour I've been building from scratch. It started as an iteration of my long term Iron Man cosplay, but starting heading away from that template, so it became something quite different. A chestplate, and separate abdomen piece. I decided that I needed some arm and leg protection, something flexible...so I went with scales. A bit of research shows that there are numerous ways that armour scales can be connected to one another as lamellar armour, so there's no "wrong" way to do it... especially when this particular armour is designed as a fantasy project. There are three key things that need to be taken into account. First, it needs to be flexible; allowing for good freedom of movement for fighting and running. Second, it needs to be sturdy; not necessarily capable of protecting from full thrusts and strikes from potentially lethal metal weapons, but capable
Post a Comment
Read more
More posts