Showing posts from August, 2015
Show all

Darkhive Worldbuilding (Part 10) - I See Who You Are 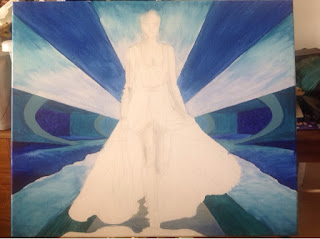 I've temporarily added the cultural elements to the two major cities in the setting, as well as basic elements for smaller villages and border settlements on the edges of dangerous zones. These may be subject to change s new ideas are developed for the setting. The important thing to note here is for the most part I haven't gone out of my way to "feminize" these assorted cultures, and except for the type of clothing worn and the housing arrangements, I haven't really applied anything gender specific anywhere. There will be a post or two dedicated to men in the setting shortly. Like the pirate/steampunk setting developed last year, this now gives prompts for how religion might play out in the Darkhive, and starts to give us new ideas for details about governing systems and authority structures, and aesthetics in the setting. Main City Cultural Elements: A  Language most commonly spoken: Street Nullan 2  Valued Possession: Mien/Personal Honour 3
Post a Comment
Read more 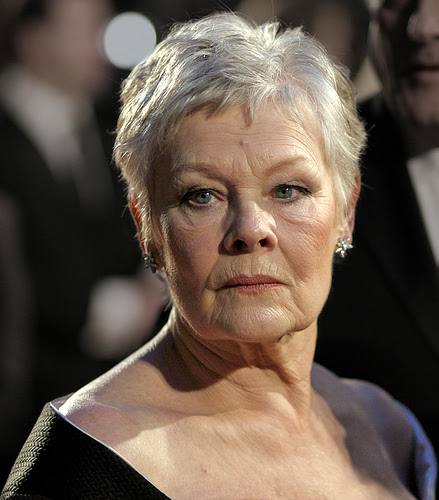 Favourite RPG Playing Celebrity There were some absolutely brilliant roleplaying and gaming anecdotes about the comedian Robin Williams in the days after his death. One of my favourite all time celebrities is Bruce Campbell, and it really doesn't surprise me that he is on the list . The notable omission on this list is Dame Judy Dench. While Bruce Campbell may be my favourite celebrity who games, Dame Judy being a gamer is my most awesome combination of the ideas.
Post a Comment
Read more

Darkhive Worldbuilding (Part 9) - We are Family 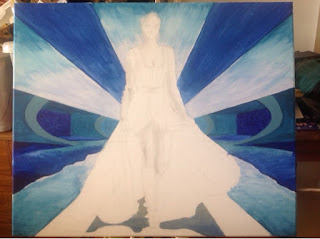 What are the cultures of this place? What are the subcultures within those cultures? When I was working on Walkabout, I divided the population into seven different cultures who each survived in the post apocalyptic wasteland via different means. I had scavengers, neo-tribalists, farmers, mutants, vehicular nomads, skyborn drifters, and hermits in their surviving glass/steel towers. Each of these were divided into four/five castes, defining the various character roles that would be necessary for a community to survive in the indicated manner. The same sort of system could easily be used to describe the cultural diversity in this setting. Scavengers are still scavengers. Neo-tribalists are still neo-tribalists. Farmers might exist on the open parts of the hive but are more likely to be focused on the various methods of cultivating fungus, and the imported creatures (lizard farmers, rat farmers?). Mutants tend to exist in the innermost parts of the hive. Vehicular No
Post a Comment
Read more

August 29, 2015
Favorite RPG website/blog Probably G+. I'm a part of a few awesome game design communities there, as well as RPG artist communities, cartography communities, communities dedicated to specific games, communities for (reasonably) local gamers. Every time I wake up (and often three or for more times through the day), I can log onto G+ and see a new range of inspirations, see people excited for new gaming products, find new artists and new art from artists I already knew. It may not be a dedicated RPG social network, but I've tailored my streams and circles in such a way that it is for me. Once I would have said 1km1kt, the regulars over there are a great bunch of guys. But they've been pretty quiet lately. The only other RPG site that I regularly visit is my online store profile on RPGNow/DrivethruRPG , which gets checked maybe twice a week.
Post a Comment
Read more 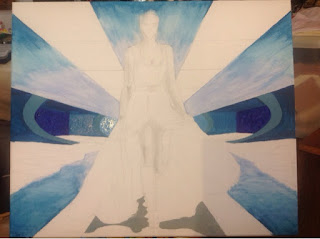 (Oops...this image and the last one are out of order) I keep trying to get back to the fun stuff of cultural development and quirky idiosyncrasies of the various races, but keep finding that I need to establish coherent background details before those ideas will make sense. I can't remember which author said it, nor can I remember the specific quote, but I vaguely remember that it was a female sci-fi/fantasy author, and that the sentiment of the quote stuck in my head as a very good and logical way to consider worldbuilding. The general gist of the quote stated that it is silly to develop motivations and surface features then try to extrapolate what is happening underneath it all. In much the same way that it is often bad writing to develop the set piece battle at the climax of the novel and then shoehorn all the elements needed to set up that battle throughout the course of the story. When done well, it can be great, it makes elements of narrative like foreshadowing re
Post a Comment
Read more

August 28, 2015
Favourite Game you no longer play Let's have a look at the game bookshelf, because almost every game I've played in the last 2 years has been played from a pdf copy on my iPad, a printed-out pocketmod, or using other people's books. I can narrow it down to a few... Alphabetically, they'd be... Chill I've ranted on this a few times throughout this series, it was one of the few games that gave great pointers toward a good horror session. Sometimes as a GM I'd get this right, sometimes not so much, but I'd love to go back to it and refine that skill set. Cold City / Hot War I had a lot of fun with this a few years ago, in the regular group we had at the time. It was one of those games we intended to revisit, but just never got back to. Old World of Darkness (specifically Hengeyokai, Mage:the Ascension, and Sabbat Vampire) I'm saying Hengeyokai because I played one session of it and it was awesome, so it's average game quality was high
Post a Comment
Read more 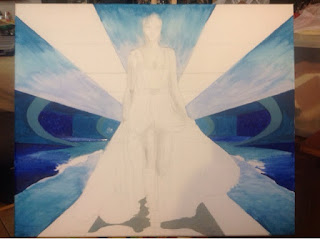 To work out how cultures might develop in a setting it might be a good idea to understand where they develop in relationship to specific locational elements and to each other. The majority of interest in this setting will be on the middle cluster of shells.The simplest way to draw a map will not be to scale, but through drawing an icosahedron net divided into hexes (the way this is drawn, the points of the icosahedron form pentagons rather than hexes). The outermost of these layers will have a naturalistic appearance. But to maintain a sort of "crumpled mechanistic" feel I'm ensuring the high points on this map tend to be at the icosahedron vertices and along the midpoints of the edges. Not always, because it needs to look a bit more organic, and I haven't particularly worked out what this upper layer would be made of...maybe a scattered layer of soil over a low density rock (like a pumice). The actual shells would be a high-density/high-resilience metal.
Post a Comment
Read more

August 27, 2015
Favourite idea for merging two games together Anyone who deserves to call themselves a "designer" has probably already done this. I've merged various card games with board games to develop RPG mechanisms, settings from one game with mechanisms from others... I've done this so many times that the various constructs have blurred together. I know I've had favourite ideas in the past, but nothing specific now. I like the idea of using different games to unveil different elements of the narrative... "A Penny for my Thoughts" to unravel mysterious stories, "Mage: the Ascension" to handle magic, "D&D" to ground things if I have new players who are shy to try something that doesn't have a big name behind it... In most cases, a lot of the players I've encountered like to play games straight from the book. If I'm going to mix things up, I'll just run one of the games I've written.
Post a Comment
Read more 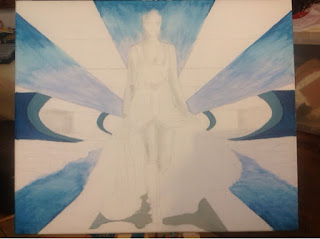 (Warning...this is a big one) Something I've been seriously considering throughout this project is the size of the setting. The figures I've given so far for shell distances (50km/75km/100km radius) have been vague numbers totally subject to change (as long as the 2:3:4 ratio remains intact for the purposes of gravity calculations). The Darkhive derives it's name from a hexagonal structure, this was intentional to give the whole complex a crystalline/insectoid/inhuman feel. For the purposes of shape, I'm looking at Goldberg polyhedrons (polyhedra?). The most famous of which is the soccer ball.  But I'm going for the more rounded versions of these forms... The Inner Shell (4 faces between hexagonal "points", 150 Hexes) The Mid Shell (6 faces between hexagonal "points", 350 Hexes) The Outer Shell (8 faces between hexagonal "points", 480 Hexes) If each of the hexes is roughly similar in size, t
Post a Comment
Read more 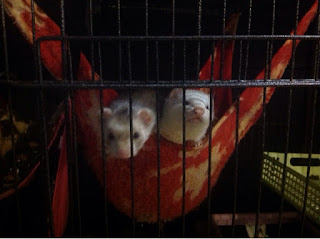 Favourite Inspiration (for your game) Honestly, inspiration can be found anywhere. I've carried notebooks around for years, just waiting for inspiration to strike, so that I can write it down. I love bad movies with plot holes or crappy endings, where I can use the setting as a basis to quickly get everyone on the same page ("Just watch the movie, and pick a lesser character from it, we're going to tell their stories and they'll be far more interesting than the movie was..."). I love cutting out newspaper articles where you can tell that there was something happening behind the scenes that the reporter isn't allowed to write (for fear of defamation...or simply because the "facts" are so hard to pin down). I love hearing snippets of conversation, or even being involved in them, and imagining the underlying meaning of those conversations completely changed if they were held in a different context (or if some of the words were being used to conc
Post a Comment
Read more

Darkhive Worldbuilding (Part 5) - I Will Survive 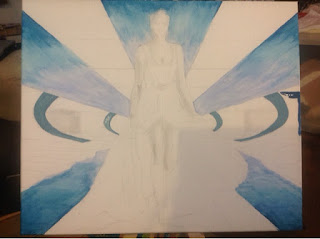 Before I go further, I've made a fundamental error in my gravity calculations. I forgot to include a centre mass. The massive "demonic elder god"/"white dwarf"/"black hole"/"singularity"/"unknown thing" in the middle. My gravity field calculations were based purely on empty shells. It's easily remedied though, and actually fixes up a few of the calculations when I put the central mass back in place. If I declare the central mass to be an equal weight to the inner shell, then each of the shells can be the same thickness while maintaining fairly constant gravity fields on their surfaces. No Core Surface Area Weight Cumulative Weight Gravity 314.16 2356.2 2356.2 0.94248 (50km) 706.86 3534.3 5890.5 1.0472 (75km) 1256.64 3141.6 9032.1 0.90321 (100km) Core Surface Area Weight
Post a Comment
Read more
More posts