Showing posts from November, 2010
Show all

November 23, 2010
Just a quick post to see if any readers out there might be interested in joining a design collective. A group of designers who are interested in cross promoting their games and game ideas, who will help each other out with industry ideas and game design advice. This group will probably also work on a few communal projects, as well as getting the support they need to get their own games going. There are a few core members, and the finer details are being worked out. I just thought I'd share this news to see if anyone else was interested. Reply to this or send me an email if you'd like more information.
4 comments
Read more

November 23, 2010
Seems that my "Babes and Bitumen" idea already has someone designing something similar. Project Death Race can be found here. It's associated Kickstarter project is here . It's similar to the concept I was going for, but I was thinking of developing a bit more story around the cars and the teams that support them.
Post a Comment
Read more 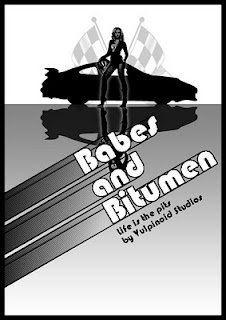 I've been thinking about some alternate ideas lately. It's an annoying habit that I have. When I'm meant to be working on something, I inevitably start thinking about something else. When I tried to create Bunraku nights for the Cyberpunk Revival Contest, my mind spontaneously generated FUBAR as a side project (which has now reached over 1000 downloads)...and now that I should be refining Walkabout, my mind has taken a wild turn into a completely different genre. What would roleplaying be like if it developed from slot cars and model race tracks rather than wargaming with toy soldiers? Instead of stories about dungeon exploration, a game might centre around a big race. Buying gear in town might instead become upgrading a vehicle, and haggling with the thieves guild might become negotiation with corporate sponsors. The intrigue would still be present with different race teams developing animosity toward one another. Relationship maps could be drawn up for the individual
2 comments
Read more

If you knew the end was coming and there was nothing you could do about it, how would you prepare? I just read this article on Wired ...it's a couple of years old as I write this, and it discusses a mystery that is decades older still. But reading it really made me think of my game WALKABOUT, and some interesting directions where it could be taken.
Post a Comment
Read more

November 16, 2010
In my readings and podcast listening, I’ve noted a few people discussing the idea of collective GMing, especially in regard to the notions of dividing up responsibilities such as narrative framing, awarding experience and determining if a character is “being played correctly”. Each of these is a very different topic, but the last one has seen some controversy. So that’s where I’ll be turning my attention. GMing is a delicate art of maintaining a collective dream (that mysterious thing that many people refer to as a “Shared Imagination Space”), and by keeping a degree of authority imparted to them by the gaming group. In traditional roleplaying games, a group might impart virtually limitless control to their GM. They allow the GM to frame scenes, tell them when to roll dice, and then tell them how the results of those die rolls manipulate the unfolding narrative. Often, in this type of set up, the players don’t even mind when a GM fudges die rolls just to ensure their story unfo
3 comments
Read more

Theory From The Closet

November 13, 2010
With over 50 episodes under it's belt, " Theory from The Closet " (referred to hereafter as TFTC for this post) seems to have become one of the heavyweights of unconventional/non-traditional/independent roleplaying podcasts. After being referred to a recent episode in regard to my Game Chef entry, I decided to download the entire back catalogue. I figured that I needed a bit of context before I just sat and listened to a new podcast, and I can be a bit obsessive so I just went whole hog and downloaded the lot. It's not like Here Be Gamers which I started listening to from close to the beginning (besides, I know Nathan from GenCon Oz, so I understood a bit more where he was coming from in his podcast)....but I digress, this post is about TFTC. I've been plugging away at listening to the whole thing, in my spare moments and when I'm writing away at my assignments and own gaming projects. Trying to listen to the whole thing in chronological order where possib
Post a Comment
Read more

November 08, 2010
Crackpot genius Nathan Russell has come up with a bastard variant of the National Novel Writing Month . He has called it the National Game Design Month...(or NaGa DeMon for short). Participants basically spend a month writing a game, getting as much done as possible. Hopefully turning out a complete product by the end of the month. I'm going to be refining Walkabout over the course of the month. I've done a little so far... A progress report shortly.
1 comment
Read more

The Myth of Cultural Appropriation

November 03, 2010
This is a rant, it's designed to stimulate thought. It is something I’ve been thinking about for a while, because there are certain people on the periphery of the independent roleplaying community who get very vocal about the topic. Cultural appropriation is argued vehemently by a number of people who have very strong opinions on the topic, but in many cases when I’ve tried to nail someone down on the subject they get very ephemeral in their responses. The more I look into it, the more I feel like this should be a topic for the Penn and Teller television show “Bullshit”. As far as I can see (based on the rhetoric and histrionics), cultural appropriation is the taking of a cultures elements and the use of those elements to pigeon-hole or even belittle the culture. If you take the stereotypes of a culture and use them to engage the typical stereotypes of the group, then it seems you are engaging in cultural appropriation. If you are prejudiced toward a culture, d
8 comments
Read more

Hopefully time to settle down (and a bit of FUBAR)

November 01, 2010
The move has been completed, rubbish has been thrown away, rooms have basically been sorted. We've actually unpacked boxes that were never unpacked after our last move...so things are seeing the light of day after six years or longer in careful packaging. Some stuff had to go, there simply isn't as much room in the new place as we had in the old place. I had the luxury of an empty double garage to use as a workshop/storage area in the old place, and now the range of ephemera once locked into that "warehouse" has had to integrate into the house, justify it's continued existence or be thrown away. With this in mind, I've done a little bit of work on my first genre supplement for FUBAR. I'll hopefully have it out on RPGNow by this time next week. The aim will be to generate a supplement each month for the foreseeable future, I've got enough ideas to keep going in this regard for a couple of years. The genre supplements will follow a basic pattern: An
2 comments
Read more
More posts