Showing posts from May, 2011
Show all

Spicing Up Your Game #4: Getting Everyone on the Same Page

May 26, 2011
Another one of those common topics of discussion on independent gaming forums involves the concept of shared imagination space, or shared imagined space, or simply SIS. I’ve heard a dozen interpretation of what this actually is, but the concept I like the best is like a communal daydream where everyone adds something into it, and everyone else reacts to the addition. Three types of contributors add to the communal daydream, the GM who sets the stage, the players who act through their players within the setting and the game mechanisms which often impose a level of coherency or apply genre specific physics to the situation. All of these forces are pulling at the SIS, the GM is often trying to pull the story toward a predetermined goal, the players are typically pulling the SIS in a way to highlight the advantages and strengths of their characters, the system often works to stop players or GM from gaining absolute control over events, thus turning the story into a game experience. Wit
Post a Comment
Read more

May 26, 2011
(I apologize to the people who've been following the development of this game, those helpful people who've provided insight and encouragement as I've been plugging away at this project...but I've provided a deeper background for those people who aren't up to speed, or who just want to see where my current thoughts lie in context) I’m stuck. I’m trying to write a skirmish level wargame that plays out in real time. Each player takes on the role of a goblin in an ancient civilization that long ago conquered its entire world, laying a grand labyrinth across entire continents before opening chasms in time-space and spreading their labyrinth to new worlds. The goblins have such a huge empire that they have fractured as a people, fighting among themselves more often than they fight outsiders, they have mutated into dozens of subraces. The subraces commonly fight each other through political intrigue and occasionally by brawling in the streets. The great goblin empire h
4 comments
Read more

May 26, 2011
I’m one of those GMs who runs a reactionary game. I ask every player to devise some kind of goal before trying to determine a story outline. I’ll develop a game plan for a session once the first scene has played out and I’ve got an idea of where the group would like to take things. Don’t get me wrong, I like to organise things. I’ll prepare a setting, with an assortment of locations ready action, a rogues gallery of NPCs ready to throw into scenes and a few potential treasures or maguffins. In some circles, I think my GMing style is called “playing unsafe” but I prefer to think of it as allowing players to actually make decisions for their characters, providing the opportunity to explore the setting and explore the characters within that setting. As a player, I’ve participated in sessions run by similar GMs and have thoroughly enjoyed it. I’ve also played in sessions run by GMs who prefer to simply run things according to a set scenario with no allowance for player decisions to rea
Post a Comment
Read more

Spicing Up Your Game #2: Danger Dice

May 26, 2011
In the independent game design crowd, there are plenty of discussions and arguments about what makes a next generation roleplaying game and how this compares to the old generation of games (and their legacy). One of the common things brought up is the ability for players to take more control into their own hands. Taking risks for added chances to achieve important goals, being able to accept responsibility for your actions by deliberately imposing complications to your own character. Instead of accepting the railroading or deprotagonising effects from the GM, you step up and become a true protagonist again. Destiny is back in the hands of the players and the story becomes a collaborative effort once again. It sounds a bit over the top. A lot of us got into roleplaying because that’s the kind of thing that our game books promised us, quite a few people never experience this and they either become jaded and leave the hobby, or they change their expectations of the hobby and become cont
Post a Comment
Read more

May 23, 2011
I've had an idea for a series of posts about ways to spice up your roleplaying games. Just some simple things that can be applied to just about any system or genre. A lot of these things are probably ideas that you already incorporate into your games (especially if you are a story-gamer or a "non-traditional" gamer), but I know that there are quite a few groups who will find these ideas new. The first idea was something that I picked up in a forum a few weeks ago, I don't remember which forum it was in, or what game it was suggested for, but I was really tempted to throw it into my rewrite of FUBAR. I didn't, and instead I'll be incorporating it into one of the genre expansions for the game (maybe one focused around action movies)... ...anyway, enough with the background for this post...on to the meat... A few of the old games I remember playing had a distinct problem with characters, it might have been something to do with the players (we were teenagers
Post a Comment
Read more

Here is one of those many backburner projects that I've been working on for quite some time. I've just been waiting for the right moment of inspiration to hit, and over the last few days it has. Over the course of two days, I've drawn up a dozen or so images for a deck of cards based on Goblins; the kind of goblins you see in the movie "Labyrinth", also known as Froud Goblins. But these goblins are my own variation on them. The suits for the deck are "Bugs", "Bones", "Cogs" and "Tools". I'm not sure if these preliminary suit images will act as the background for the numbered cards or if they will simply end up as atmospheric pieces to inspire creativity for the deck. I have also generated the "Ladies" for each deck (roughly equivalent to the Queens in a standard deck of playing cards). More details and images to come.
5 comments
Read more

May 12, 2011
FUBAR has been doing pretty well. Over 1000 downloads from the various sites where it is available, and most of the feedback I've had from it has been pretty positive. The game has appeared on a Russian game related database, as well as appearing on a few English speaking databases (where I wasn't the one to add the game)...it seems that people are taking notice of it, and I've got to be happy about that. With this in mind, I've taken on board some of the feedback I've received and have expanded the game from 30 pages to 50...thus making the FUBAR Director's Cut. To make this version of the game even more open, I've specifically released it under a Creative Commons license. I'd love to see a few people pick up the mechanisms, and run with them in entirely new directions The new version is currently only on the Vulpinoid Studios RPGNow store .
Post a Comment
Read more

Kickstarter and Other Options

May 10, 2011
Daniel Solis is releasing Do: Pilgrims of the Flying Temple via Kickstarter . And the success of this project has basically gone viral for the purposes of indie games. It even got a shout out on Wired . It looks like it's going to be a great game, and Kickstarter looks like an awesome way to fund a project. ...but it can't be used to fund projects outside the USA. I've been looking for similar funding forums that do work outside the US. My searches probably haven't been as thorough as they could have been, since I've always come away with a generally negative response. But now I've found IndieGoGo , and I might be able to put together a project of my own. I'm thinking about putting together a physical copy of FUBAR, now that I've written up a second edition of the game...maybe putting out a proper version of Walkabout...or something new. I haven't decided, but they'll probably all get a run at some stage. mjnh
Post a Comment
Read more

May 07, 2011
For the past 12 months I've been working on a number of projects, some of which I've publicised, others of which I've kept very quiet about. There have been stints in hospital, moving of house, looking for work...but on the more creative side, I've probably been generating more artwork than I have in over a decade. Some of this can be found on my deviantart profile , a great deal more is found on scraps of paper, cardboard and scattered computer files. A lot of this work has been an attempt to get my head straight about future projects, I've built up a catalogue of inspiration images, atmospheric photography, sketches and diagrams. ...which means I've basically put the Game Mechanism of the week project on sabbatical. At this stage I'd have fifteen weeks or so to catch up on, and I'd rather be designing than theorising about design. Over the next few weeks I'd like to reveal some of the design ideas I've been working on, to see if there is a
Post a Comment
Read more 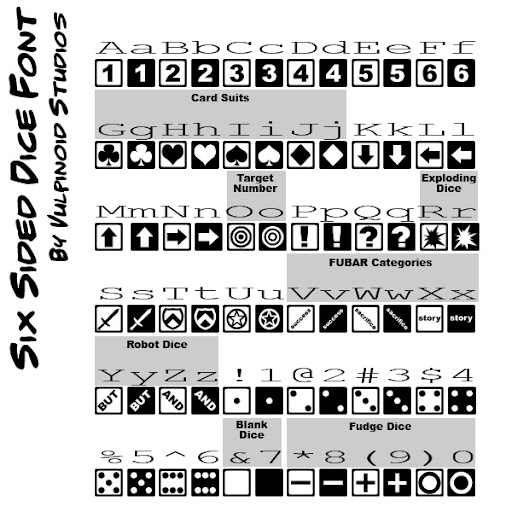 With some interest being generated in my online store over at RPGNow , I've just put up my first font for sale. If this generates a few sales, I might consider adding a few more.
Post a Comment
Read more
More posts