Showing posts from June, 2017
Show all

June 30, 2017
The theme is "Borders", two of the ingredients are "Yarn" and "Cut"... ...clearly someone has to make a game about an embroidery circle or group of tapestry makers.
Post a Comment
Read more

June 29, 2017
It's on again. Here's the site No Idea where or how I'll begin, and I've got a couple of busy days ahead. I don't expect to get much headway happening over the next weekend, but I'll try to keep some updates going over the next few days to describe my progress.
Post a Comment
Read more

Vehicles of the Law 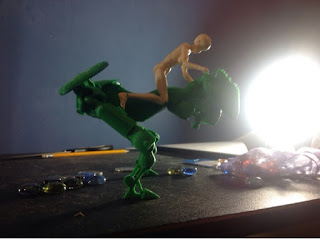 I've been working on cleaning the house, 3d printing, and trying to organise illustrations and page layout for "The Law". That's why things have been going slowly here on the blog. So here's an update on those other things I've been doing, and how they tie into my game design projects. This is the advanced transport unit of the Agents of the Law, or at least a variant that occured to me as I was 3D printing the model that will be used for posing illustrations of the vehicle. A biped certainly has a cool cyberpunk anime feel to it, but it moves away from the Judge Dredd vibe (even though recent advances in robotics mght actually make it a feasible design). Despite the coolness of the biped, the larger vehicle was actually designed to be a quadruped. So here's the complete model, with the Lawbringer cycle.  I still think I need to do a reprint of the cycle, probably about 20% bigger than the current model.
Post a Comment
Read more 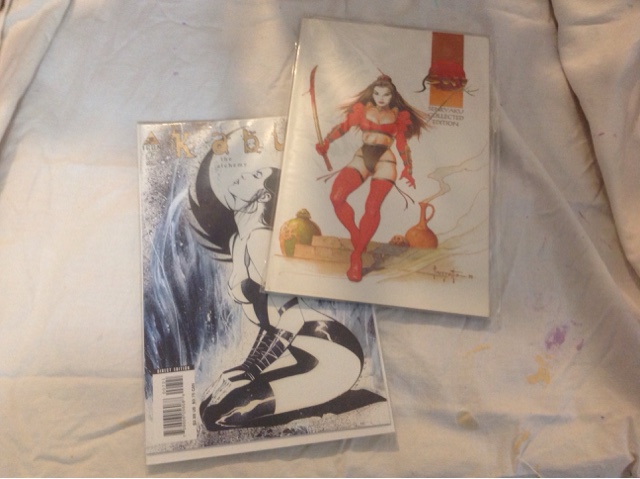 I'm one of those people who is very picky when it comes to the comic collection. A lot of comics are read once, then carefully bagged and boarded before storing on shelves or in boxes. This is not due to a belief that the comics are worth a fortune, more aboit respecting stuff that has value to me after too many instances where my stuff has been damaged or thrown away. I figure that if it looks respected, or valuable, then other people around me might treat those things the same way. I guess it has worked to some extent, because a few friends have given me their comic collections to be stored in the same way, knowing that even if their comics aren't worth a lot on the resale market, at least they'll be in good condition if they ever want them back (rather than damaged by housemates in share houses, or lost in transit between multiple accommodations). So, while I'm developing a game that's basically set in a certain comic universe, using a size and page c
Post a Comment
Read more

June 24, 2017
One of the great game designers has passed to the great game beyond the veil. I never met him, but so many of my contacts across social media say that he was a great guy as well as being a great game designer. He was the creator of my favourite game, Mage: the Ascension, and therefore increibly influential in the way I play, run and design games of my own. I think the last times I wrote something of this nature on the blog, it was the passing of Erick Wujcik... who designed the TMNT game for Palladium, and was just as influential to my game design, but in different ways... and the passing of Robert Pirsig, who wrote the book Zen and the Art of Motorcycle Maintenance . By taking one of my favourite books, the aforementioned one by Pirsig, and turning it into a spectacularly open game that expanded the potential of roleplaying in so many ways. This one has hit me hard. One by one my heroes are dying. I guess that's just a symptom of getting older. Now I just wish I could fill
Post a Comment
Read more 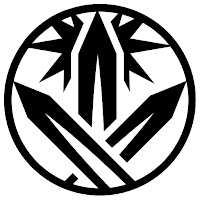 If you've read through the blog, you'll know that I'm a visual thinker. I make maps. I make images. I like things to have patterns and systems to have a sense of order to them. I don't like games where there are a dozen subsystems for a dozen different tasks. I like ideas that feed back into themselves making holistic ecosystems of play. As a part of my current design project, The Law, I've decided to make a series of glyphs for the attributes. In my earlier "image-free" version of the rules, I was using placeholder wingdings and webdings, but it's time to move to something more distinct and tailored to the game. This process saw me make a set of initial glyphs and show them to the world. Conflict Influence Knowledge Mysticism The responses were generally positive, but a few feedback comments raised some valid issues that would have led to problems. The glyphs generally portray what I'm trying to get across with them, but
Post a Comment
Read more

June 22, 2017
I've been digging back into my game The Law . The core system of character generation offers a few choices that lead to a few specific choices, then direct characters toward something that would feasibly make it out of basic training in the Academy of Law. This was intended from both a diegetic (in-world character directed) perspective and a non-diegetic (player directed) perspective. You can find the original concept here . But I've been reading a lot about random character generation, and regular readers of the blog will know that I love the concept of the life-path character generation system. This has led me to considering new ways of creating characters in the game. I'm not sure if I'll be offering these generation options as a part of the basic rules, or as a variant in some kind of player's guide...but here's what I've been thinking. If base attributes are d4, where an upgrade either increases an attribute die by +d2, adds a skill to the chara
Post a Comment
Read more

June 22, 2017
I'm not going to mention names. I've seen the patterns repeated many times over the years, but a particular instance reminded me of it again this morning. We've seen it across the world in many guises...anti-vaxxers using claims from celebrities derived from unsubstantiated data (or even data that has been deliberately debunked)...climate change denialists who point to one cold day as an argument against global warming...politics in the USA... Someone will typically derive their opinion from their experiences, and when their experiences don't adequately match the situation they'll draw on the claimed experiences of someone they look up to. Opinions are like gut feelings, they don't have substantiated facts associated with them, they just resonate with a person and subversively ingratiate themselves into the psyche. Once embedded, they're hard to get rid of. The specific instance I noted this morning involves people's experiences with games. Particu
Post a Comment
Read more

June 17, 2017
This time last year, Vulpinoid Studios had a birthday sale on RPGNow/DrivethruRPG. The intention was to have this as a regular annual event, but in the past 12 months I don't think I've added anything new to the shopfront. Due to this, it felt a bit silly running a sale when there were no new products available. Hopefully, by the time next year comes around there will be a few completed projects from my current pool of unfinished ones.
Post a Comment
Read more 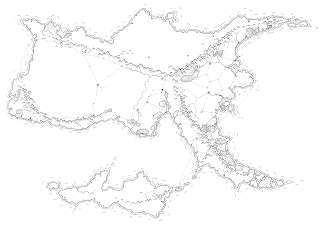 Once the hand drawn elements of he ma are completed, the image is scanned into the computer.   Generally the image seems to end up a bit faded, so I increase the contrast to make the dark elements blacker, the pale elements whiter, and fade away the pencil work until it's generally eliminated. The next step sees a shadowing around the coastlines. I do this with layers. The top layer is the hand-drawn inked map. The second layer is a white block filling the shape of the land mass. his is done by making a complete white layer, then using the "magic wand" tool to select the water and delete the white layer in these parts. A third layer is a duplicate of that white layer, but inverted to black and then blurred a bit. This gives a black nimbus around the coastline. In this case, a fourth layer was created in a very similar manner to the third. For this layer, the blurring was more pronounced. The final effect of this is to make a more pronounced outline that fade
Post a Comment
Read more 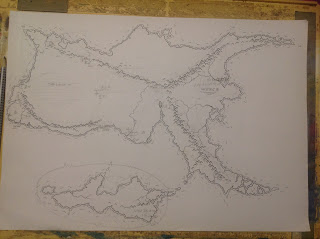 It's been more than a day, but here's part 2 of this series of map tutorials. We left with the part where the ripples were drawn around the coastlines. Since my process basically follows geographic elements, the brings me in two ways to waterways and rivers. (1. Following the coastline water theme and leading inland... 2. Using the placement of mountain ranges on the map to determine where streams and rivers flow from, and leading them toward bays and bayou areas on the coastline). Zooming in on a sample set of rivers along the eastern coastline, you can see where I have a few streams starting in each mountain range, using jagged lines to show how they twist and turn through hills that are too small or not strategic enough to appear on the map. Pairs of creeks join up, then these larger streams join up into rivers as they approach the coast. Where a river might reach a depth where sea-going vessels are capable of travelling, I split the river from a single line, to a p
Post a Comment
Read more 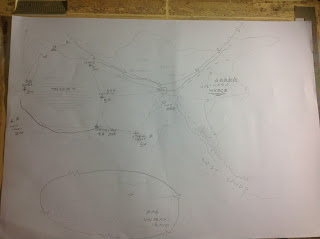 The LARP we've been running for over a year has gradually grown from a half dozen players to regularly getting 15-20 players. In that time we've seen 30-40 characters, some of whom have come from strange and exotic lands into the game. The more players we get, the more we need to structure the world beyond the immediate environment. Otherwise we end up with anything and everything. So that means time to start naming things and mapping them. When developing a a like this, I tend to start loosely. Then I draw on the ideas of other people, incorporate them into the core ideas, and elaborate upon them. The general idea is to centre the map on the region where the LARP takes place. Next, we have a mysterious Empire to the east, a wilderness to the west, mountains blocking off a wasteland to the north, and a local kingdom to the south. I've worked with one of the other players to develop some details about the western lands and the major cities of the area. I've pr
Post a Comment
Read more

June 05, 2017
As a part of the +Ettin Con   collaborative Worldbuilders group I'm doing a map. A massive map, more than a metre by a metre, and it will be hand sketched and painted. The upcoming blog series will start with the basics that I've been given for this map, and work through the process of development until the final piece is done. his will include back and forth between myself and the client (The Worldbuilders , of whom I'm also a part). I've basically got just under six weeks to get this done. Should be fun.
Post a Comment
Read more

June 02, 2017
Last month was pretty hectic with my teaching practical lessons taking up my time for most of the day (and many of my nights), leaving the weekends to do house work and not leaving much time at all for blogging, illustration, or game design. Things should balance out again over the next few weeks in the lead-up to  +Ettin Con , where I'll be engaged in collaborative worldbuilding, and hopefully running a beta playtest of "The Law". Regardless, there might be a few more mapping tutorials on their way, and some other bits and pieces that I've been holding out on.
Post a Comment
Read more
More posts