Showing posts from July, 2009
Show all

Game Mechani(sm) of the Week #29: Democracy

July 25, 2009
Traditional Gaming is a dictatorship. It could be a benevolent dictatorship with a GM sitting at the head of the table, carefully crafting a story by picking and choosing from the actions of the players who follow along blindly, rolling dice every now and again, but basically enjoying the story ride. It could be a malevolent dictatorship where the GM still sits at the head of the table, but now exists in a more antagonistic role, hammering down any players who choose to step outside the bounds they have defined for their story. I've played under both styles of GM. I'm sure that anyone who has played in more a couple of games (and who has had the opportunity to play under a couple of GMs) will instantly be able to think of games where these two cases have been applicable. A lot of players like the idea that they can put a character into a world and have the GM work this avatar into a storyline. Many of these players quickly get bored. When I created The Eighth Sea, I specif
Post a Comment
Read more

July 25, 2009
Sorry I haven't had the chance to post anything over the past fortnight. I'll try to catch up with a few mechani(sm)s shortly. For the moment though, I'm interested to see that I've been getting a few emails from people who've been following the blog. Always good inspiration to keep me writing. Thanks.
Post a Comment
Read more

July 13, 2009
After my post a couple of days ago, I've started a second blog for my non-gaming/non-philosophical creative pursuits. It's called " Creative Output of the Fox ".
Post a Comment
Read more

July 12, 2009
On the surface karma resolution is a fairly boring mechanism. Karma resolution relies on referring to listed attributes or quantitative elements without a random element. The premise is simple. The side in a conflict with more force to exert automatically wins. If one character has a combat skill of 3 and another character has a combat skill of 5, the character with 5 will win the fight. But most forms of karma resolution have some kind of twist in them. Naturally, it's these twists that get me interested. Short Term effort versus Long Term endurance In some systems a player can temporarily increase their ability to influence a situation in exchange for a later reduction. In our hypothetical earlier situation, the character with a combat skill of 3 might be able to temporarily add a couple of points to even the fight, but in exchange for this they might tire themselves out. Perhaps a character can temporarily add a number "X" to their value being compared, but for
Post a Comment
Read more

A consideration of things now that the year is half over.

July 12, 2009
I have a few things on my plate at the moment, some of which will probably have to go on hold. I've already missed the deadline to build a costume suit of "Iron Man" armour in time for Supanova. I had hoped to get this done by Gencon Oz at the latest, but that's not looking like a reasonable timeframe either unless I really focus on it as a priority. But the Gencon priority was to get Quincunx working. At this stage I know that I have a functional system and setting, but there is still some playtesting to be accomplished, a decent amount of typing and some layout work to be achieved. Thankfully, I've had a friendly email from someone who's interested in helping out with the Quincunx project. His name's Riley and he's one of the founders of Every Gamer's Guild in Newcastle. I really must get up there one of these months. Maybe next month for a preliminary run of Quincunx with enough time to make any drastic changes if they prove necessary. In a
Post a Comment
Read more 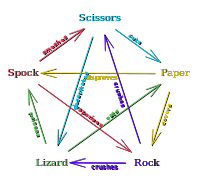 Rock-Paper-Scissors. Here and Here I've heard a few options recently for "Diceless" systems. Some of them are quite clever, and some of them seem overly simplistic. But what is a diceless system and what ramifications does a diceless paradigm impose on a game. There are said to be three forms of resolution in roleplaying Fortune, Karma and Drama (with references here and here ). Dice are a fortune method, so that leaves karma and drama as methiods to resolve actions. I've already offered a concept for using beads as a method of randomisation. But hard-core diceless fanatics seek to create a game with no usage of randomisation what-so-ever. Amber was the first game I encountered that claimed to be diceless. I played it a couple of times (the most notable of which was a home-brew based on a combination of Amber and Mage: the Ascension). This uses a karma system, where the player with the best score simply wins, with a bit of control from the game's GM to
9 comments
Read more

July 03, 2009
It's halfway through the year, and by my calculations I probably should have reached game mechanism number 27. So I guess I've got some catching up to do again. But for the moment, I'm fascinated by the concept of "Flow" (especially as seen in a current thread at Story-Games). There are numerous ways to look at the concept of "Flow", but I'm going to restrict myself to two. Flow from the perspective of the characters within the game (which I will refer to as Game Flow). Flow from the perspective of the players experiencing the game (which I will refer to as Metagame Flow). Flow is described fairly well in the thread, so I won't go into too much detail here. Suffice to say, it seems to be very similar to the concept of Zen "no mind". Flow is the situation a person finds themself in when they become so absorbed in an activity that they start to lose a sense of themselves. Time starts to lose it's meaning, the action is all that&
Post a Comment
Read more

July 03, 2009
Never one to be afraid of jumping on a bandwagon, I've started listen to my local gaming podcast over the last couple of days. http://herebegamers.com/ It's a fun chat with a couple of guys who really love their games, and it's interesting to watch the professionalism of the podcast gradually increase. I should have been heading up north to meet the guys behind the podcast this weekend, but an ongoing curse preventing me from getting to Newcastle has struck again (this time in the form of a car that has completely blown it's distributor). Listening to the podcast reminds me that there are a lot of people out there who have a wide variety of interests within the field of gaming, and it reminds me of how diverse the hobby really is. I guess I'll be spending the next few days listening to the rest of the podcasts currently released.
Post a Comment
Read more
More posts