Showing posts from December, 2017
Show all

The Tutorials are Accumulating 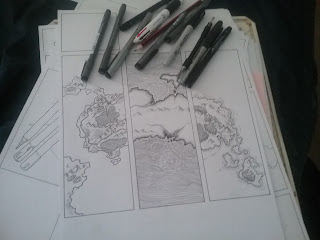 I've got about 20 pages of these now...but more to come. Then I just need a decent working computer to scan and compile them into PDFs.
Post a Comment
Read more

Making Good on a Promise 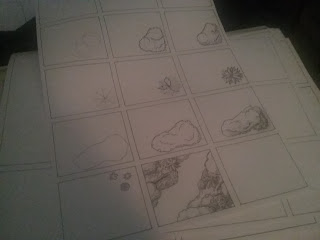 It's been two years since I've been promising to create new map-making tutorials. Now that I'm having computer issues again, and it's that quiet period between Christmas and New Years, it has felt like a good opportunity to start drawing. Once I get a decent computer working again (rather than the tablet I'm writing on now, or the second backup laptop which sits beside me on the floor while my wife uses backup number one), then I'll be able to scan the images digitally.
Post a Comment
Read more

In the last couple of weeks, I've watched two movies that have swept through popular culture with massively polarising effects. I'm not going to post specific spoilers about them, but what I write generally with regard to themes and concepts in them could be considered spoilers. The two movies were... The Last Jedi and Bright In both cases, a subset of people I'm linked to have voiced specific dislike of the property. The two groups voicing their dislike have different reasons in each case, and mostly the groups are exclusive of one another. But in both cases, the movie is a bit different to things that have come before, and that seems to scare certain types of people or just annoy them. A certain subset of fans didn't like the previous Star Wars movie "The Force Awakens", claiming that it was basically a rehash of everything we've seen before. They wanted something new... yet when "The Last Jedi" gave it to them, they didn
Post a Comment
Read more

December 05, 2017
A while ago, I was working on an idea to run a computer driven game where characters were defined by a string of alphanumeric characters. It got a bit of interest, but I never really took it anywhere.  Post 1 Post 2 Post 3 Post 4 Post 5 Actually, digging back through those posts, it's actually where I was thinking of heading. I've been having a bit of trouble maintaining the motivation to regularly upkeep the LARP in recent months, so it might make things easier to automate the whole thing. To generate characters via a basic website, to track factions based on which characters belong to them, and to map the influence of those factions across the map of the LARP world.
Post a Comment
Read more

December 04, 2017
It's been a couple of days since the last post. I've been discussing a few ideas with various communities, including game design groups, the LARP community I'll be running with, a few wider LARP groups, and a local NERF group. It looks like a NERF driven LARP is enough of a novelty tnat people are intrigued. That means brand new players. I also showed some of my existing players some minimalist rule sets, such as this one, and they were shocked at how such things could be called a formal set of rules. So, once again we're aiming for a sweet spot of "not too heavy, not too light". Lots of people seem interested in the idea of a formal game economy, and a decent system of development for both characters and equipment. It feels like I'm on the right track. Three is the magic number. I'm looking at three general categories that define a character (race, culture, and occupation/career), and three levels of progression before mastering something.
Post a Comment
Read more
More posts