Showing posts from February, 2014
Show all

February 26, 2014
Over the past couple of months, we've been striving to get a fox mascot for Vulpinoid Studios...it's taken a bit of time. We're pretty close now, and had hoped to bring home a fox with us today. But a hiccup has caused that not too occur. Hopefully we'll live up to our name soon.
Post a Comment
Read more 10 days ago, I posted my first response to the challenge of  +Dyson Logos , the challenge consisted of a partially drawn map, and then other people would use their imagination to complete it. Apparently there are over 50 entries so far. Here's my second attempt at the challenge. I could probably spend longer on this to get it "perfect", but I've got a lot of other projects that need attention, and the time limit for the contest has now been reached. Now to get back to finalising the text for Voidstone Chronicles, and definitely time to get a few more pages done of the Walkabout comic.
Post a Comment
Read more

February 19, 2014
I'm working on the equipment costings for my Voidstone Chronicles project...Arms, Armour, other useful equipment for people going on epic quests...at the moment I'm trying to keep the base figures at a reasonably cognitive scale (most things cost a value between five and twenty coins), more exotic or powerful stuff gets exponentially more costly. At the moment, there is a complicated little formula that I'm working with. It's based on a range of predefined elements for the equipment to ensure a level of game balance versus cost, then it rounds things off to the nearest whole number.  I know that there are people who say "point buy systems can never truly be balanced because every character and every player valies things different,y according to their character motivations". That's true, but at least this idea is giving a rough estimate of a good starting point. Things can always be tweaked later, once the system hits the actual players. The com
Post a Comment
Read more 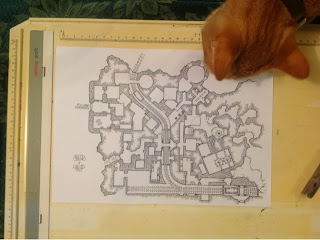 In case you haven't seen it, Dyson Logos is running a contest where he has supplied a part of a map, and has requested people to finish it off. Here's my first attempt. (Shown with cat for scale) There are some other great entries over at... http://rpgcharacters.wordpress.com/2014/02/13/further-maps-of-the-dungeon-of-lost-coppers/ Have a look at how creative people can be with a core concept to work from.  Once you've had a look, you might be inclined to attempt the contest for yourself.
Post a Comment
Read more

February 13, 2014
If you haven't heard of the Imaginary Funerals site, I recommend going over and taking a look. There's some really interesting gaming stuff starting to appear over there. For the moment, use the following link as a starting point... http://imaginaryfunerals.com/fuck-stratification/ It touches on a lot of stuff that I've thought about over the past couple of years, as well as concentrating a few key concepts into a manifesto that will probably be considered a turning point within the hobby in years to come (I know that predictions like this very rarely come true...but I'm making the call anyway).
Post a Comment
Read more

The Art of Game Design

February 07, 2014
I've just been alerted to a monstrous tome of knowledge that seems to provide a huge array of ideas regarding the concepts of game design. http://artofgamedesign.com/ They've also got a deck of cards containing the key concepts, and an Android/iOS app that can be downloaded for free. I'm digging through it now. Hopefully more to come soon.
Post a Comment
Read more
More posts