Showing posts from August, 2011
Show all

August 17, 2011
There could be a break in transmission as I transfer files from an old laptop to a new one. Especially when it comes to transferring those frequently used programs such as the Office Suite, Photoshop, and the various other programs I use for 3D rendering and game design. Hopefully this should take no longer than a day or two.
Post a Comment
Read more

One small step for goblins, one enormous leap for a game about them. 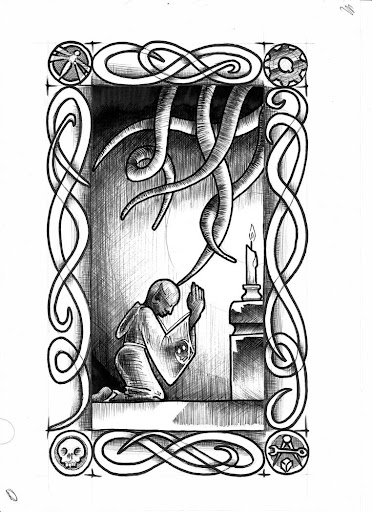 Goblins are a race of huge genetic diversity; there are big ones, small ones, scaly, furry, green skinned, brown. Trying to catalogue them all would be a nigh impossible task. Trying to create a roleplaying game or a miniatures game capable of capturing the diversity is surely a fool's errand. But that's the task I've set for myself. So how do I do it? At this stage I'm treating goblin desriptions fairly simply, with two modular parts. Firstly a racial heritage that defines a series of baselines, then a series of occupations that boost those baselines. It seems to be fairly ordinary stuff, many games have a similar structure. But I get the feeling that a genetically diverse and decadent race that has evolved into hundreds of niches requires a carefully structured society to avoid devolving into complete anarchy. Goblins are traditionally treated as anarchists, so this might be their tendency when far from the central authorites of their race. The "powers that
1 comment
Read more

August 06, 2011
A bit more information regarding my thought processes on the Goblin Labyrinth. First a few key design points for the project. The game uses a combination of live play and miniatures. The game needs to be scalable for a variety of play group sizes. Ideally, anything from 2 players to 200. But it's more likely we'll be looking at the 6 to 30 range. All players need to be connected to at least 3 other players through some kind of relationship (whether that comes in the form of an alliance or a rivalry). The game needs to be fairly self-sufficient in terms of ecosystem and economy within the game world and narrative potential. (Any GMs need only be present to help resolve rule disputes between players, a small game between experienced players shouldn't need GMs at all). The game needs to generate story through meaningful player decisions. The game needs to be fun and easy to learn. It's a tough set of criteria, but I'm gradually finding my way towards a rule set that
Post a Comment
Read more

August 04, 2011
For the last couple of nights I've been crossing and meandering between two projects. Number 1: Finishing off "The Great Bard", my game chef entry which seems to have drawn a bit of interest ( Thanks for the review Steve ). Number 2: Getting the goblin mob combat rules to sit right in my head. I've revised and refined the concept a bit. We now follow a standard pattern for all different types of actions, whether combative, mystical or otherwise. It works off a few simple notions. a) Goblin characters are surrounded by mobs of lackeys, the mob can be any size as long as you've got the money to keep paying them. Lackeys are expendible and work like a combination of special abilities and hit points...once you lose a particular lackey, you lose access to the ability provided by that lackey and your mob size gets smaller. b) When a goblin engages a task or enters conflict with another mob, they select a team from their mob. This team size is based on the leadersh
Post a Comment
Read more 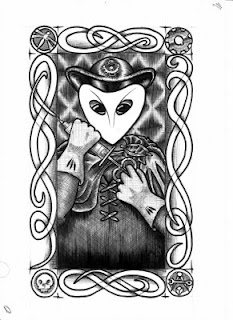 I've added a few more goblin tarot images to my deviantart page. I figure I'm about 3/4 of the way through the collection now. I'm happy that these images are getting a good viewing by people who haven't previously seen my work. I'm starting to get a few more regular watchers out of this series. If you'd like to have a look, a link to the gallery is here .
Post a Comment
Read more
More posts