I think she's getting there.

August 08, 2015
I've been focused on two things over the past day, the first has been a multiform game combining political live action, nerf/boffer live action and miniatures. It's not my project, but I've been comandeered to integrate the miniatures and live action side of things.

There is currently a game that is doing something similar locally. The basic premise in their game follows... Warhammer 40k... Rogue Traders... Everyone plays the significant members of a command team for a massive trading starship. Every now and then, these prominent citizens of the empire gather to discuss things, and occasionally compete against one another when a cache of ancient technologies has been uncovered. Players can lead troops into battle, protraying themselves (with miniature stats approximating their RPG stats), the vast quantities of underlings on their ship become strategic tools and cannon fodder. The down side of their game is that a lot of player characters were dying because enemies would take them out (as strategic threats or as a way to demoralise the opponent). I don't know the full story, but there was a bit of an upset at one stage.

So I'm looking at a different tactic, as advised by the games originator, where player character will offer bounties that need to be fulfilled to achieve story objectives, but completely unrelated groups of mercenaries and miscreants fulfil those objectives (or die trying). This gives players stuff to do, it makes the world seem a lot bigger than it really is.

If I get the chance, I'll post up these ideas shortly.

The second thing I've been focused on is... 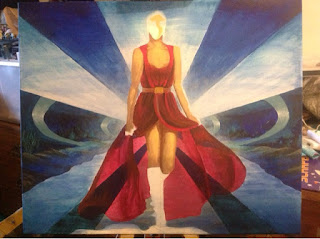 ...she also needs a lot more work before she's done.