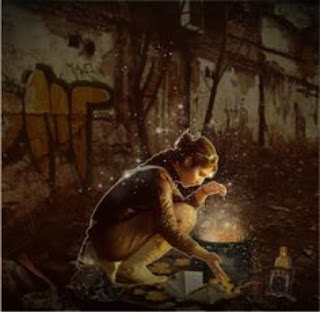 FUBAR is simple, really simple. Adding too much complexity to it is a distraction, but I like my magic to feel different to the mundane events of the world.

In Mage: the Ascension, we have coincidental magick which functions subtly, and Vulgar magick which is blatant "rip-apart-your-perceptions-of-what-is-and-what-should-never-be" stuff. We also have 5 distinct levels of power in each of the 9 spheres of mystic influence.

These are the two things that really make the Magick work in the game and the setting.

Each level of power is slightly more removed from reality, and you need a level of raw mystic insight (Arete) before you can access them. I'm thinking of bundling up a lot of this stuff.

With that in mind, my first direction takes us toward an idea that invoking a level of magick automatically applies and equal number of positive and negative traits to an action. Level 2 magick, gain two positive traits, gain two negative traits... Level 5 magick, gain 5 of each. You always take the good with the bad, and the further you go the more extreme the outcome will become. The maximum you can go is equal to your Sphere score (which is in turn limited to your Arete score). The names will be filed off, refined and rebadged when the final version of this is good to go.

I'm also thinking that something closer to Ars Magica's magic system might be useful here. By that, I'm aiming toward the idea that magick can be cast on the fly but it is harder to do (automatically lose  positive traits or gain negative traits), while magick that has been practiced is easily for the Mage to invoke. Thus, each mage has a range of rotes that they have mastered...maybe gaining a free one every time they increase in Arete (or increase in a specific sphere) and spending an XP on any additional effect they want to have mastered.

I'm also considering the idea that Coincidental Magick deliberately has a lower profile than Vulgar effects, but is easier to work within the confines of reality. Maybe we halve the modifying traits (rounding up)... A level 2 coincidental effect gives a single positive and negative trait to the action, level 5 coincidental effects give 3 of each.

If magick manifests through another die added to the roll, maybe this die roll needs to be substituted into either the "Success" or "Sacrifice" slot and cannot be dropped, regardless of whether it is good or bad. If you have a good result, the magick enhances your action dramatically. If you have a bad result, you get burned. Spending Tass/Quintessence or burning away your soul for the effect, might allow a character to roll multiple mystic dice, and then choose to substitite one of these into the success / sacrifice result...but a mystic die still has to be added. The extra power gives a better potential result, but such power is hard to come by.

We're basically looking at two concurrent complimentary die rolls. I'm still trying to resolve the coincidental / vulgar divide in a more elegant fashion, perhaps as an offset to the lower positive/negative traits added, we allow the player to avoid adding in the mystic die for a coincidental effect.
Design FUBAR Ideas Mage