This convention was basically what I imagine a lot of those independent conventions in the US, like the GoPlay ones, are like... or at least how they started. Groups of friends gathering in a venue to play one another's games, and the new stuff from around the world.

(Photo by +Jez Gordon, I hope he doesn't mind)

My table is the one in the back corner near the organ.

FUBAR has reached a new audience of players and has piqued interest in others who either heard what happened or saw the game in progress.

I think we've reached a good balance point with traits and how they interact with the system. The game was quick to pick up by players who had never seen it before, the relationships worked as traits that prompt action as well. 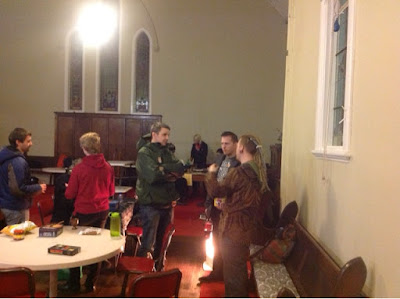 (This photo mine, focused on three of the players from my session)

I also got the opportunity to playtest another round of "Bug Hunt", with a couple of very interesting suggestions to add to the rules.

Time to revise, replan, and relaunch.