July 13, 2014
One of my favourite techniques for getting a metallic effect on metal figures is to just go with the medium. I just take a sharp hobby knife and scrape back the paint and primer until a bare metal surface shows...nothing looks more metallic than raw metal. But these figures aren't metal, so that technique can't be used at all. I need a different way to bring highlights and contrast to the parts that I want to look metallic.
Since the metallic components on these figures aren't very big, there isn't much room for drybrushing them. This is especially true for the metallic bands on the armour and the outlined panels. Instead I load a small amount of paint onto the tip of the brush, and draw in the topmost edges and outermost parts that look like they'd be likely to catch the light. The paint I use for this is three parts a bright gold metallic, with one part silver (sometimes I might add in a touch of white to make the mix a bit more opaque because the metallic paints often don't have a lot of pigment in them). 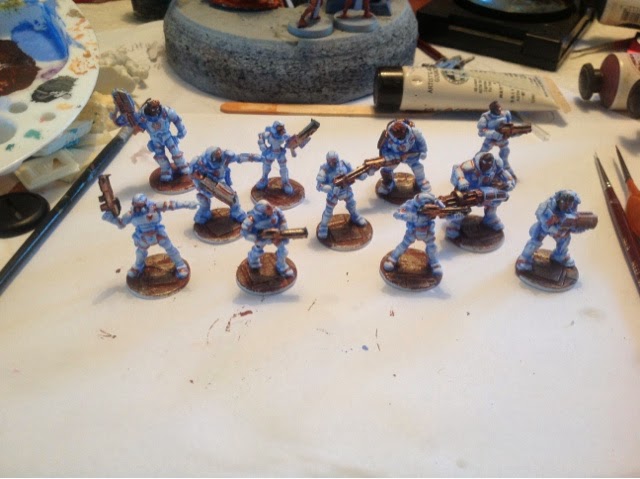 Using this same mix of paint, I lightly drybrush the bases, and this gives an "old dirty metal plate" look to the panels being walked on.
With the overall colouring done, it's time to pick out some details. In this case, the obvious details to bring out are the faces that a few of the figures who have them exposed, and some of the specialist equipment that might have specific point costs or modified rules (depending on the game being played).
For faces, that means dotting eyes and shading skin tones. For equipment that might mean accent shades, dotted white/yellow "lights", or adding letters/numbers/other-symbols.
So far in this picture, I've dotted the whites of their eyes.