July 10, 2014
I had an art teacher who once stated that the painting doesn't really begin until you've laid down the first batch of colours and fully covered the canvas with pigments that will underlay the final work.
This bit of the procedure is basically the final bit of prep work before the "proper" painting can begin. 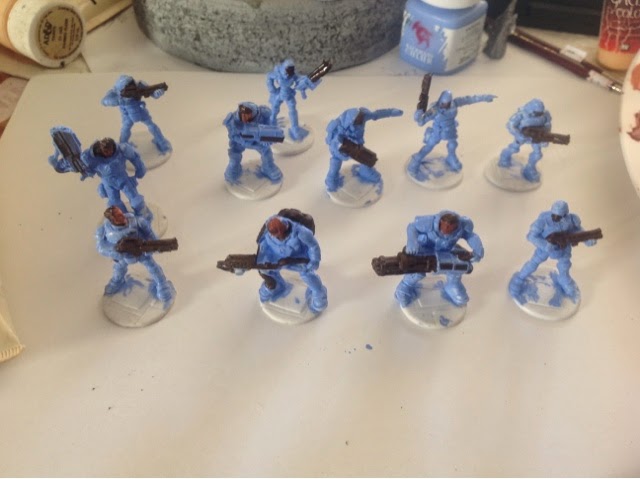 In the case of these miniatures, I painted everything I intended to be metallic with a dark earthy brown colour. The thought process going through my head here was to indicate that even though the armour is clean and pristine, the weapons see a lot of use, they are regularly oiled and maintained. I also like my metallic shades to be something more than a straight silver or gold...perhaps indicating alien forging technologies, or alloys that just aren't seen here on Earth...so I give them base coats of reds, greens, blues and other shades to make them a bit interesting.
I touch up the areas that aren't metallic with the sky blue colour, just to make sure everything has a layer of paint on it.
This works from the perspective of the art teacher's quote to make sure everything is ready for the next stage of the painting procedure. It also works from the perspective of using slightly hydrophobic materials, because a complete coat of paint basically wraps around the figure and locks onto itself forming a barrier between the plastic underneath and the future coats of paint that will provide detail later on.
Normally, I'd coat the base with some kind of paint as well, but I haven't decided at this stage what kind of ground the figures will be standing on. I don't have any existing figures that this team needs to integrate into, and normally the base of the figures is the easiest way to tie a group together. Maybe something metallic, maybe something snowy...it will come to me as I paint more.