July 10, 2014
Before we go much further, a simple rhetorical question...
Why did I only use two base colours for the figures (one for the armour and one for the metals)?
It just something I do to make sure a figure doesn't get to busy with different colours. I'll add in other colours when detailing comes up later in the process, but for the core colouring I'll stick to a single colour and some kind of accent colour. If I use a third colour, I'll use the old 60-30-10 ratio that is common to industrial and interior design (that's probably an old habit from years of university training and study)...60% of the figure painted with a dominant shade, 30% of the figure painted with a secondary feature colour, and 10% painted in either of these shades (giving a 60-40 or 70-30 ratio) or using that final 10% to create an accent colour (perhaps depicting a figure's rank or something special about them).
More colours than that and you can easily get overwhelmed with the palette of choices. Nothing ends up standing out and the whole figure just ends up looking too busy.
Now back to the process. 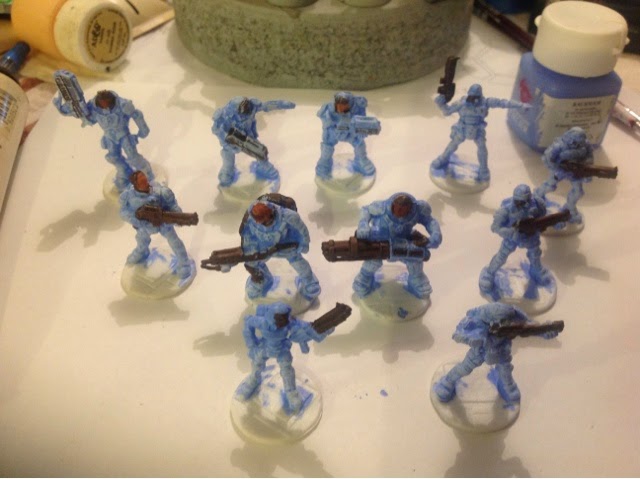 Once the figure has been coated in it's base colours, I'll take one of two options: either I'll shade or I'll highlight.
I'll show shading in the next series focused on a single signature figure. The next step I've done in this case is to begin the process of highlighting. I go old school, I drybrush.
Some people love drybrushing, some people hate it. It wears out brushes, it brings out details in good figures and brings out imperfections in poor figures, it's a quick and dirty way to highlight. It's an easy technique to pick up, but can be a crutch for painters who are looking to produce higher quality results.
The basic theory is that you get a bit of paint that's a lighter shade to the base colour. You sparingly apply it to the brush, and wipe most of it off before touching the figure with it. When you lightly brush the sparingly loaded brush against the figure, inly the most prominent ridges get paint applied to them. Thus the crevices end up in shadow while the ridges are lighter. To do a quick job, most people use a much lighter shade and thus the contrast between ridges and crevices is dramatic. This would use an application of equal parts white and the base colour (or maybe a mix of lemon yellow and base colour to give a warm light effect, or sky blue and the base colour to give a cooler light effect). In this case I'm already using sky blue, and the yellow would just give a weird green tinge, so white it is.
I use a slightly lighter shade, and a more heavily loaded brush when I drybrush. The result is less dramatic and more natural (at least that's what I think). Instead of the 50-50 mix, I use two parts base colour to one part white.
Even when I'm doing a production run on a squad of figures, I like to take a bit of care.