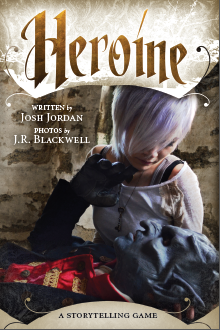 The kickstarter was here.

A few quick points before we start getting into some details.

Heroine sits squarely in the camp of games that are typically known as ‘Story Games’ rather than ‘Role-Playing Games’.

It is beautifully laid out.

Its sixty pages contain far richer instructions for storytelling and narrative based play than most “Dungeonmaster guides” or “GM guides” contain in two or three times as many pages.

I read half of the book irritated by the fact that the Wizard of Oz was not written by Victor Fleming, but was in fact a book by L. Frank Baum.(1)

It has taken me a while to get into the headspace of ‘story games’, these are often seen as rules light games that don’t reflect realism. Instead of providing lots of detail to pin down what your character can or can’t do based on preloaded back-story, these games explore the characters and the world as the players go along. You don’t spend half an hour or more rolling dice, allocating point pools or generating goals and agendas, you simply jump into play and let the story take you where it will.

Some story games are capable of developing fascinating worlds and richly complex character histories (such as the experiences we’ve had with A Penny for my Thoughts), some gradually build up the capabilities, strengths and weaknesses of characters in the present (adding traits that define the agents within the narrative). Heroine really doesn’t do much of this at all. The characters are mechanically divided into two types: the heroine, and her identical companions. It is only through story flavour that the companions are differentiated.

On the one hand, it provides the opportunity for any type of companion without feeling the need to tie them into specific statistics. You could play a cowardly lion, a hookah smoking caterpillar, a loveable furry giant, a dragon, an inseparable pair of comic-relief twins, or something as mundane as the a younger sibling to the heroine. Mechanically, they are all just as significant to the story and thus remain equal in their abilities to contribute to the story. After all, this is a game about the heroine, it is not about them.

On the other hand, most roleplayers who have been at it for a while are accustomed to the idea of niche protection, whether consciously or otherwise. They like to know which character will be best able to help out in a social situation, which is the combat beast, which is the healer for when things go bad. Heroine ignores this, probably because in the long run these differentiations don’t really matter. What’s important is whether the heroine, retreats back to her childhood, becomes a monster like the horrors around her, or realises her coming of age and returns to the ‘real world’ with a new sense of maturity.

Since the game does away with subtle descriptions differentiating the characters, it also strips the tasks down to three simple feats. A heroine can attempt to ‘be successful’ (the default for acting smart, using social actions, or acting with honour), ‘be heroic’ (the default for conflict, physical deeds or acting bravely) or ‘take a chance’ (basically everything else). In a quirk of the rules, a heroine cannot use the same feat three times in a row. Since they all work in the same mechanical way, I don’t see a whole lot of point for making this a deliberate part of the rules; but I can see why narratively you would do this, it keeps the story interesting. That’s what the game is all about.

I’ve seen this done in a few other games, so nothing overly revolutionary there…but with an expenditure of enough point a companion’s player may take over the role of the narrator/GM. That’s an interesting twist, and while I’ve seen it done clumsily in other games with rotating GMs and shared narration duties, Heroine seems to do it more elegantly. Again, there is nothing beyond narrative consistency to drive the way each player might handle their narration duties, we don’t have one narrator focused on social troubles, another focused on mystical effects; anyone can introduce anything into the story.

The narrator shares the same currency as the companions, spending points to inject challenges for the heroine to face; and spending more points to have the ‘big bad’ show up.

There are three distinct sides to play in this game; the Heroine’s side, the companions and the Narrators. So fittingly, the game is written with the core rules at the start followed by the slightly more detailed rules for each side of play in separate chapters later. I do admit that I found this a bit disconcerting at first, because the various sections felt incomplete without understanding how the other parts fit into the whole structure of the game. Only once I’d read them all did the game fall into place…and I think a couple of play sessions will really show the subtleties of the system.

I certainly don’t think this is a game for everyone. It’s very asymmetrical in play, but in a way unlike traditional games. Many players I know would be able to handle the dichotomy between a GM who is the origin of most story elements, while the less powerful players are subjected to that story. In heroine, there is a single player who is the recipient of most story elements, the less powerful players take turns to either inject story elements or be subjected to them. It flips the nature of roleplaying on its head, and then takes away a lot of the ‘safety buffers’ such as specific character abilities, experience points and treasures gathered along the way. That could be a bridge too far for many traditional groups, but it could be the perfect tool to get new players into the hobby.

I do like the game, and if I had the cash on me, I’d definitely hand some of it over for a hard-copy of it. Hopefully there will still be a few copies around when I do pay off my current round of bills.

(1) Once Leah and I managed to load up Wikipedia and look up Victor Fleming, we saw that he was in fact behind the movie The Wizard of Oz…a re-reading of the sentence that irritated me indicated Fleming’s name associated with Heroine inspiring movies (such as Jim Henson’s Labyrinth), rather than Heroine inspiring books (such as Lewis Carrol’s Alice in Wonderland).
Game Review Other People's Games

Here's something I've been working on...inspired by the recent work of  +Dyson Logos . (Awesome, I can stick google+ links in my blog posts now.) Click the image for a larger view, or to download it.
Read more

Based on a request from a reader, we move back to the urban environment. This time focusing on a variety of roof types, and how they might be depicted in a map. A lot of fantasy cartographers limit themselves to the outlines of buildings when they draw maps for their towns, but I find that adding in roof lines creates a sense of depth and detail. I could easily add more detail regarding towns and urban environments, but for the moment this will do...the next few tutorials will move back to nature. I might even get to sewers, catacombs and dungeons eventually.
Read more

This tutorial looks at a few techniques for depicting more natural terrain; forests, cliffs, and beaches. It also shows how cartographers can start to develop their own style with the tutorial techniques presented. In this way we see two methods for shading forested areas, and a new technique for rendering water (especially suitable to beaches). For those who read through the tutorial, and wonder what I mean when I say "dyson hatching" have a look at the mapping tutorial by Dyson Logos connected through this link .
Read more