March 13, 2014
What kinds of symbols would religions use to signify themselves in fantasy settings?

I guess it would be much the same as the assortment of symbols found in our world. Some religions might use stylised weapons to represent the martial prowess of their deities (a hammer, a scimitar, a bow), other religions might use symbols that embody the virtue of the religion (a feather, a sun, a mirror) or provide allusions to the way the religion views the path of it's practitioners (a wheel, a footprint, ladder).

More literally minded religions (or naturally based ones) might find a commonality in using animal symbols to represent totem spirits, or reflect the virtues traditionally attributed to specific beasts. Or they might use ideograms representing holy places (mountains, waterfalls, trees).

More esoteric religions might work to obscure their symbolism in highly stylised forms (spirals, geometric forms), and eventually those symbols might become so stylistic that they lose any affiliation to their original meaning. 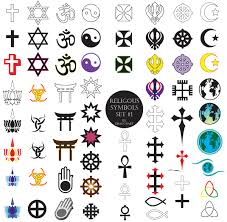 I'm not sure where I'm leading with this, just thinking in public...
Ideas Rant