July 17, 2019
I've done sequences of blog posts on mapping and geomorphs. I've also done a sequence on building terrain elements... so none of this is particularly out of the ordinary, it's just been a while since I've done a series of posts like this.


For this project of physical geomorphs, I need to work out what sorts of environment I'll be simulating with the tiles. For this, I'll think about the various types of miniatures in our collection, because there will be conflicts where one side or another has home ground advantage... there will also be a range of locations that are just fun to play scenarios in.


My wife has a small horde of undead miniatures, which would tend to imply a graveyard or necropolis of some type. She also has a horde of fantasy celts, so a suitable village, some forests, rolling hills, or farmlands might be appropriate. I've got a bunch of goblins and gremlins from various games, who might be found in swampy or bayou areas. I've also got a few more civilised types who might be more comfortable in some kind of urban terrain. Then there's ruins, badlands, and specific terrain elements like roads and rivers to take into account.


That's almost a dozen types of terrain already, and when we're looking at ways for these terrain elements to mix and match that means hundreds or possible combinations. The downside here is only having about 2 dozen starting hexes, which means these early geomorphs need to be carefully prioritised. Light forests can be simulated by placing a few individual trees, so we don't need to dedicate entire hexes to them. Hills can be placed separately, but work well as forms sculpted into the hexes. Rivers would be carved into the hex, some straight, some curved, some as junctions... such rivers can work for swamps and bayous too, with minimal adjustment to the hexes. I've already got roads worked out, these hexes just need some painting and surface finishing.


Even though there are other options available, I've needed to consider available space in my current accommodation layout. That means for this first version of the project, I'll be working with the longer rectangle format. 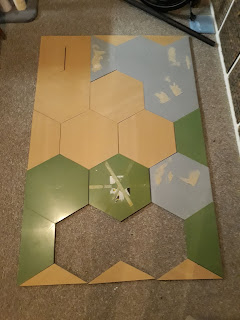 
If I start with rivers, the simple option would be three straight segments of river stretching across hexes. Once I add a single bend, that's when things get tricky. 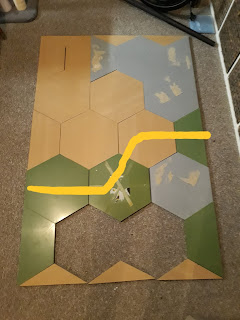 A single curve requires either a second curve and an end point on one of the half hexes, or maybe just an entry on one of the sides of a half hex... though that second option limits the way the hex tiles might be placed, and that kind of defeats the purpose of using modular geomorphs. 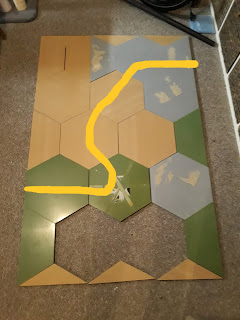 Using a few more twists makes things more modular and more interesting. The only thing missing now is river forks and junctions. There still doesn't feel like as much modularity as I'd like, so that means taking some drastic action. 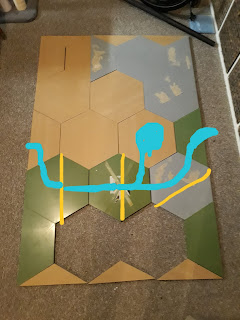 That means breaking the hexes in half, so I can mix-and-match the halves to create a wide variety of potential hexes. They're no longer tesselations, but for this project we don't need to be too strict in that regard. In fact, for the purposes of storage, half hexes might actually be better. A dozen half hexes could lay out a wide variety of river formations, using as few as six to cross the field in a straight line, or any number of them to create a meandering waterway.